Every October I watch “You’ve Got Mail.” And, every October, I want Kathleen Kelly’s (Meg Ryan) life. I don’t know any other character who actually makes me want to be sick.

She makes it look so lovely. Suddenly, I want to scuff around my house in socks, sit in sunbeams, and wear outrageously comfortable-looking sweater sets.

But this October, in particular, I feel very Kathleen Kelly-like.

I don’t own my own bookstore nor was I forced to abandon a lifelong dream. Yet, I am, as Kathleen’s long-time friend and bookkeeper Birdie Conrad declares after hearing Kathleen’s decision to close the failing bookstore, “daring to imagine that (I) could have a different life.”

When Patricia, Joe Fox’s (Tom Hanks) girlfriend and the die-hard associate of a fast-paced New York publishing house, remarks that she is going to offer the now unemployed Kathleen Kelly a job,   Joe states that Kathleen could never work in Patricia’s corporate world because she lacks Patricia’s “killer instinct.”  I think that instinct is what many women believe they need not to thrive, but just plain survive in this crazy world. And, it might be true. After a century-long movement for gender equality, women are out-achieving men in work and education. Yet, after working among these over-achievers, I began to wonder if I was even working with women. It seems as if women have decided in order to overcome that glass ceiling, they should just stop being women at all.

Deciding to abandon a full-time job that was making me miserable and my creative curiosity icy-cold, was deciding that I didn’t have to give in. Not yet at least, not until I am disproven that genders are genders for a reason. I want to be educated, yes. I want to achieve things, of course. But how a man achieves things is different, and should be different, from how a woman does.

Feminist Germaine Greer wrote that the “classic burning of the bras” image of the feminist movement “represented liberation from the oppression of the male patriarchy” (The Female Eunuch, 62). After my experience in the work-a-day world, it appears that in our haste to burn the bra and throw off male patriarchy, we have thrown it off only to discover a new oppression, the realization of a void: the loss of the innate, female sense of nurturing, kindness, and caregiving. 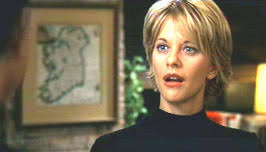 Kathleen Kelly definitely didn’t have the “killer instinct” to survive in the business world. She disliked competition and confrontation, loathed when she actually said “exactly what (she) wanted to say at the exact moment (she) wanted to say it.” And, after crushing Joe Fox’s ego at a coffee-shop date, “felt terrible” for being cruel, for “what if what I said mattered to this man…? There is no excuse for my behavior.” Still though, she is successful in her own way. She writes and publishes a book, discovers a fulfilling relationship, and does so in her own sweet, charming way.

Achieve anything ladies, but don’t forget, please please, that putting up more twinkle lights, admitting daisies are your favorite flower, and wearing a skirt goes a long way.

Hello friends! I'm Alexandria. After joining the work-a-day-world post-graduation, I discovered an overwhelming yet undiscussed malaise among the females of cubicleville: the general conclusion that maintaining femininity is an impossibility with everything else modern girls must do. My blog, Vintage Muse+Modern Views shows today’s girl how to link classic feminine grace to the modern, casual, fast-paced lifestyle (with a little DIY thrown in too). So, follow me! And learn that classic beauty and grace can still fit into your world. If you love vintage-inspired things, check out my Etsy shop too!

Blogs to Muse About